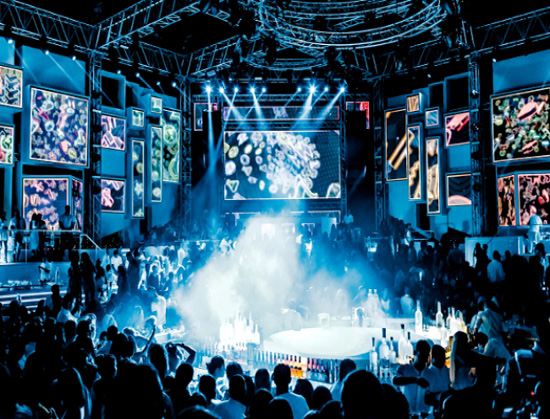 << Back
The lighting side of the project called on more than 350 fixtures. Procom supplied and installed around 100 LED washes with effects delivered by the Cyclops Zoom 37 and CPX436-MZ. In addition to this there are 50 Cyclops CL350 - SBW hybrid spot beam wash moving heads and over 150 Cyclops CL-280B and CL-230B beam moving heads. The Philips Showline SL Nitro C LED strobe luminaire circles the venue and the full setup is controlled by an Avolites Pearl Expert Pro with touch wing and a pair of Avolites Titan Net processors. Tony Chidiac and Ross Chapple did the programming of the lighting set up.

Moving to the video mapping, the Dubai-based distributor opted for two Avolites AI media server S4 servers to control over 150 sq-m of LED screens and more than 200 pixel bars. John Munro and Martin Harvey designed the video mapping and produced the video for the venue.

In terms of rigging, the club’s structure is based on Eurotruss trusses. This season, has installed four concentric circles (10m, 8m, 6m and 4m) above White’s bar area, controlled by Chainmaster hoists. Another circle also covers the area in front of the DJ and includes extra Cyclops CL-280 Beams, the vertical trusses also hold beams as well as SL Nitro C LED strobes.

‘This is one of the most impressive club venues I have worked on,’ said Mr Parry. ‘Working alongside Procom gave us the opportunity to add an extra dimension to the space and to exceed the owners brief, the beautiful set-up and environment in addition to the quantity and sophistication of the equipment deployed have allowed us to create one of the best nightclub venues in the world.’